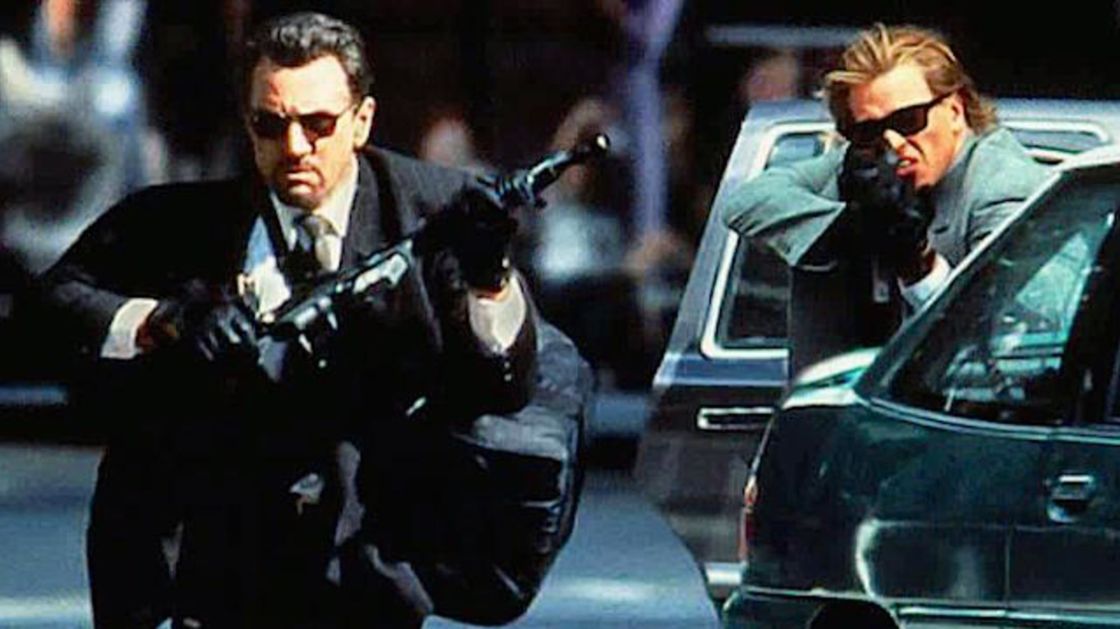 No But Listen: On Heat

no but listen debate by thethreepennyguignolJune 19, 2020

So, sometimes, here at No But Listen, we like to Argue. You might have guessed that by now, given the name of this site, but I feel as though we have been lacking in our true angry yelling roots of late. We started this film blog to shout, dammit, and we shall remember that!

Which brings us to Heat. When I (Louise) saw Den of Thieves for the first time (and LOVED it), my dear co-writer pointed out that it was just a cheap rip-off of Heat, which I had never seen. Oh, he promised me, it’s like Den of Thieves, but so much better.

And look, it’s just not. It’s not! There’s so much that drives me nuts about this Michael Mann so-called classic; I was raised in an anti-Kilmer household, and I suppose that doesn’t help here when I’m meant to connect with his lead and not laugh at his very silly hair and screechingly bad attempts at performing. Amy Brenneman, as romantic interest Eady, is grindingly nineties in her uninteresting-ness, and her chemistry with De Niro is wheezing rather than sizzling. The action scenes have their charm, for other people, so I hear, but the planning that leads up to them is just interminably dry.

It’s a really fucking average and enormously overlong film that promises on the sizzling chemistry of Pacino and De Niro and fails to deliver on it in just one undercooked scene of no-effort small talk. I love both lead actors in this movie, no doubt about it, but this film is built around the two of them coming together in a sizzling denouement which promises to strike the very fabric of cinema alight. But this is a tired performance for both of them, lackluster and thin, reliant on the victories of yesteryear instead of bringing us the ferocious screen presence that we expect from these two. What should be a fiery actorly explosion is nothing more than a sad limp-firework fhwip. Over the course of time better spent making meringues from scratch.

Y’know, just this once, I would like to be defending the less mainstream opinion in these articles. Up to this point, it’s just me saying “isn’t this great thing great because of reasons you already know about?” Does that mean I’m not enthusiastic when it comes to talking about Heat? Nah, it’s a fucking awesome movie.

At the time of release, when I was a wee boy and my co-editor hadn’t muttered her first words yet (they were probably Rob Zombie), Heat was marketed as a gimmicky release that finally brought together the two greatest actors of the seventies New Hollywood Era. Al Pacino and Robert De Niro had appeared in the Godfather Part 2 but they were leads in different timelines so never actually shared the screen. Heat was billed as a heavyweight title match between these two legends, and it is just that. Heat has many supporting characters but none (apart from Natalie Portman as Pacino’s step-daughter) can take the focus away from the main duo.

It’s now seen as a classic of American cinema for the right reasons. Pacino and De Niro, despite playing versions of their own stock characters, do disappear into the roles of master cop and master criminal. They’re opposites in every way but have a mutual respect for each other that gives their relationship a warmth not usually found in people who are trying to kill each other.

Heat is a film about obsession, a two -and-a-half-hour epic that feels like bingeing a terrific miniseries, where the character’s obsessions destroy their lives to the point where they only have each other to relate to. It’s director Michael Mann’s best film and one of the greatest films of the nineties Also, that shootout is astounding.

If you liked this article and want to see more stuff like it, please consider supporting us on Ko-Fi.