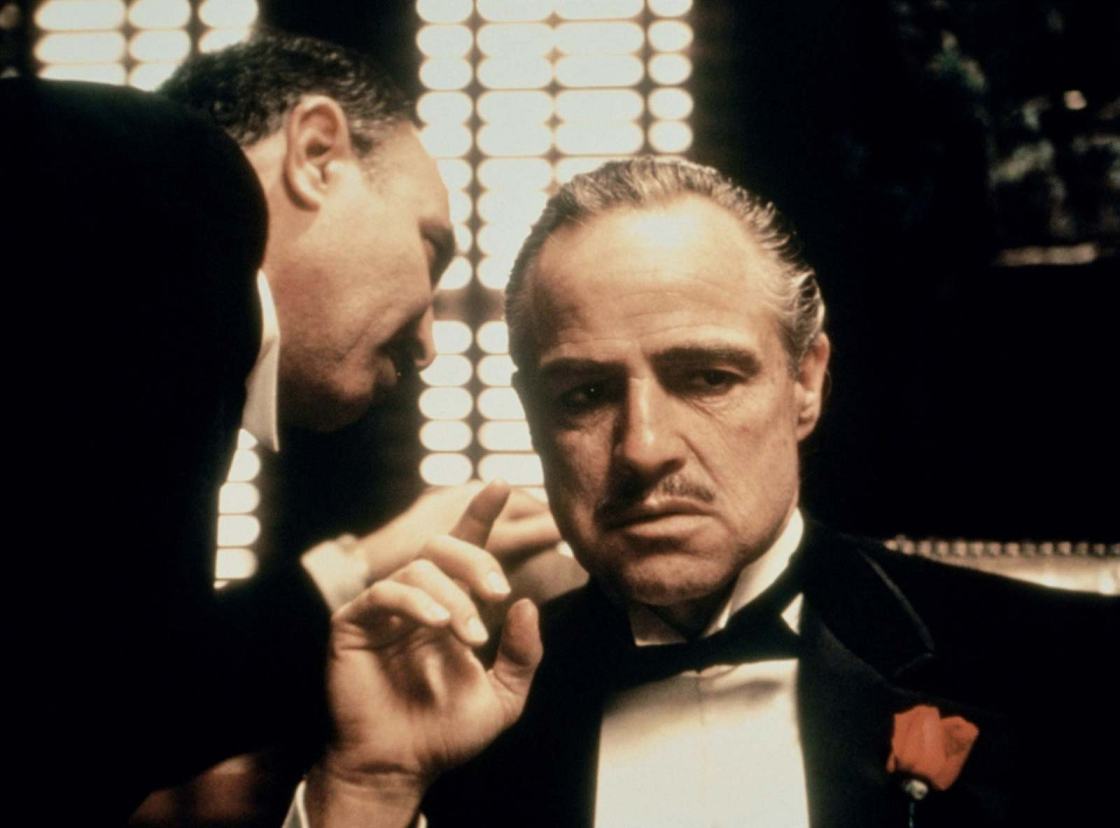 I Watched The Godfather For The First Time

How dare I claim to run a “film blog”, to actually “like films”, and never to have seen what is, by so many polls and surveys and critics’ choices, the best film ever made? Honestly, I don’t want to sit here and make excuses to you – while you were busy studying The Godfather, I was actually having fun watching Hedwig and the Angry Inch and enjoying the genderqueer bops therein.

Ahem. Anyway. What matters here is that I have, finally, watched The Godfather, Francis Ford Coppola’s 1972 mob movie starring Marlon Brando and Al Pacino, the first part of the Godfather trilogy, and regularly quoted as the greatest film of all time. I don’t know what it was that had me avoiding it for so long – it’s not like I’m surrounded by some anti-Godfather cabal, determined to keep it from me. Some, like the co-editor of my blog, would argue that I am a natural-born contrarian who petulantly avoids what they’re told to enjoy, and instead goes and watches another dreadful Blumhouse remake instead of something good. Some might be right.

I’m going to be straight with you, though, and say that there is one reason and one reason alone that I finally decided to give this movie a shot, and that’s Al fucking Pacino. I’m a huge fan of Pacino’s seventies work (Dog Day Afternoon is still one of the best movies ever made), and missing out of his definitive role as Michael Corleone was a gap in my knowledge I could no longer stand.

And if you come to this movie for Pacino, let me just say this: you are not going to disappointing. I didn’t expect it to be anything less,  but fuck me, this is just a chef’s kiss of a performance. Nuanced, surprisingly restrained, with the depth and weight to sell even what gaps in the storytelling leave out, it’s everything I wanted it to be. The late lamented and utterly great John Cazale (as Fredo) is an equal delight in his iconic blundering slipperiness, and James Caan and Robert DuVall as the rest of the Corleone brothers are just as fucking fantastic. If you, like me, need to tempt yourself into watching this movie, do it for the performances, because they’re honestly just as good as you’ve been told.

You’ll notice, however, that there is one specific performance I haven’t mentioned. And that’s because there’s one specific performance that I haven’t made my mind up on yet. Marlon Brando (you know, the guy who assaulted his co-star in Last Tango in Paris) as Vito Corleone is a role that’s so iconic, so deeply parodied, so synonymous with the gangster in modern pop culture, that it’s almost instantly impossible to take him seriously. How many times have I seen The Simpsons do this bit? And I’m meant to take it seriously? He has fucking cotton balls in his mouth, for fuck’s sake! It’s a performance so ripely absurd and enormous that it almost up-ends the entire film; indeed, for a movie that claims to be about Michael, it indulges far too much of Brando’s inherently indulgent performance, giving us more than we need to understand him just because watching Brando feast on the scenery seemed too much for Coppola to pass up.

But then there are these moments – the smaller moments, where he is Vito and not The Don – where Brando feels brilliant. It’s a performance that swerves wildly between almost unwatchably silly and totally compelling, and I’m not really sure which side I land on with it at the end of the day. No doubt because I’ve seen it parodied so often, for sure, but watching The Godfather in 2020 is to watch a movie that you’ve already seen gummed together from forty different parodies and homages and straight-up rip-offs.

Performances aside, this is a film beautifully crafted by Coppola and his crew. The cinematography is lush, casting frequently brilliant, and the enormous and complex story is, for the most part, handled with confidence and coherence. Somewhere between classic noir and Mean Streets, it balances violence, luxury, love, and hate in broad, sweeping strokes in a generally satisfying way.

But it is a film of its time, which means, unfortunately, that it’s lacking in one thing in particular: women. I think I was spoiled by seeing GoodFellas (which I prefer by a mile, for the record) before this, which features that brilliant and pivotal turn from Lorraine Bracco as a central part of the storyline; The Godfather has no such interest in its female characters, and it skips out on what could have been a really interesting different perspective in the process. The two most significant female characters are Diane Keaton, who Michael wanders in and out of the life of until he strongarms her into marrying him, and Talia Shire, Vito’s only daughter, whose major involvement in the plot revolves around her husband beating her. Michael briefly has another wife, who gets blown up in an unavoidably comic moment of slapstick, but we don’t get to know much about her other than She Is Attractive, Did You Know?

The story is big enough that it serves to both justify and undermine these complaints. Because I can understand why Coppola wanted to lean out the script, with so much going on, thus cutting an inessential story-driven perspective, but when the movie is so gigantic in other ways, it’s hard not to notice how functional and ill-explored the women are. Would Brando playing with one less cat really have hurt the movie, if it meant that we could get a little more of the alternate (and, as implied through the movie, more emotional) perspective of the women involved? I don’t think so.

But you know what? It’s still a wonderful film, and I’m still glad that, at last, I can say that I’ve seen it. I don’t think I’ll be in any rush to go back to it, but it’s an impressive achievement, even if it has been absorbed into popular culture to the point where actually watching it almost feels inessential. But, even fifty years later, it still lands a lot of its major moments, and it still features some soaring performances from a stellar leading cast. Even if I can’t work out where Marlon Brando falls on that scale.

Are there any major gaps in your film knowledge? Have you seen The Godfather, or have you skipped out on it too? Let us know in the comments below! If you enjoyed this article and want to see more stuff like it,  please consider supporting us on Ko-Fi. You can check out more of my work on my personal blog, The Cutprice Guignol!