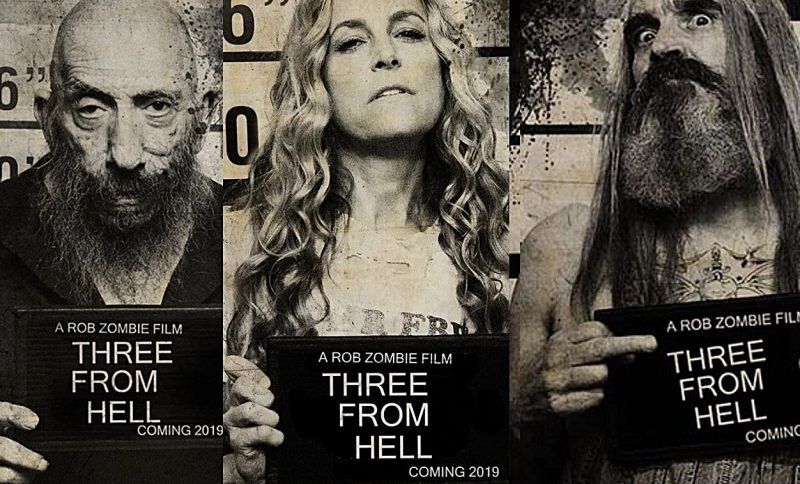 “But this is your favourite director,” My writing/life partner pointed out to me last night, as I tried to find an excuse not to watch 3 From Hell, moments before he retreated to another room to, sensibly, read a book instead of watching it with me.

“Don’t you dare use that against me!” I shouted back. Record scratch. Yup, that’s me. I bet you’re wondering how I ended up in this situation, right? Let’s reel it back a little.

I am the resident Rob Zombie apologist for this blog, this city, and perhaps even this country. For about the last ten years, I’ve been oddly hypnotized by Zombie’s cinematic work; from House of 1000 Corpses to Lords of Salem to 31, he’s just a director that I find myself continually drawn back to for no discernibly clear reason.

Because here’s the thing, there’s a lot of stuff in Rob Zombie’s movies that I would switch off another director over. The violence is utterly over-the-top, almost every movie features a sexual assault or rape that could easily have been cut without losing much plot, and there seems to be a dazzling commitment to having women stabbed through the naked tit in a lot of his big-screen efforts, a conceit which 3 From Hell is not free from. Sometimes, I feel like being a Rob Zombie fan is just something your born with, like attached earlobes or the ability to appreciate the work of Johnathan Franzen unironically.

And yet, I don’t exaggerate when I say that there’s something about his films that I find utterly compelling. His movies are totally and completely singular, so totally him that within ten minutes you know that nobody else could have made them; to call him genre-literate would be a gross understatement, as he pulls on everything from the grindhouse splatter flick to the feminist film theory canon. He makes films for himself, it seems, and puts what he finds interesting out there with no apology, and that feels totally unique to me. I don’t really follow directors specifically (or the ones that I do follow, such as Barry Jenkins or Jordan Peele, are early enough into their careers that they don’t yet have a huge back catalogue available for me to paw through with my nasty little fingers), but if there’s one who I will always watch, it’s Rob Zombie.

So perhaps you can understand my slightly double-edged attitude to his latest flick, 3 From Hell. He’s probably my favourite director, and yet, I come to dread watching his films, because I know there’s so much in them that I will not be able to defend. Pitched as the third part of the Firefly family trilogy (starting with House of 1000 Corpses and followed up by The Devil’s Rejects), this film been reviewed with wildly disparate responses, holding an uneasy 50% on Rotten Tomatoes as I write this: some people are calling it a insta-horror classic and Zombie’s best movie to date, and others are writing it off as the worst movie of the year. And now, after watching the movie myself after only mild protest, I can safely say that it’s both.

Okay, let me get my apologetics out of the way (I’m going to skip the plot explanation, given that I don’t think anyone who wasn’t looking for this review specifically after seeing the film is going to stumble across it): a lot of women get killed with their tits out in this movie. The dialogue, via Zombie, sometimes feels so garishly inhuman that I feel like I shouldn’t be able to make sense of it with my people-ears.

The loss of Sid Haig (much lamented, and deeply missed) hangs heavy over 3 From Hell, and his replacement, Richard Brake, does his best but can’t match Haig’s utterly singular energy. Sheri Moon Zombie, while I do enjoy her screen presence, isn’t a good actor. Bill Moseley, who is, doesn’t get the chance to show it nearly enough, especially compared to some of his outright iconic scares in Devil’s Rejects. The story is chaotic and often meandering, and the film could easily have been trimmed by a good fifteen minutes without losing too much in the way of actual meat. There’s also this moment where a woman is shown to be attracted to Bill Moseley’s Otis and is framed as kind of crazy for it, which was a personal attack against me personally and one that Mr Zombie, Esq. will be hearing from my lawyers directly about.

And yet. 3 From Hell is a movie that, on so many levels, just worked for me. The first twenty or so minutes, as the film deals with the incarceration, arrest, and fascination around the Devil’s Rejects, feels like a sly and very pointed jab at pop culture that tries to make awful people into cultural icons. If the sequences were Moseley and Haig (in his final scenes in the movie, and perhaps some of his best of the trilogy so far) are interviewed by wannabe-documentarians looking for the deep emotional reasons behind their violence only to be met with amused dismissal and outright trolling aren’t a skewering of stuff like Extremely Shocking.., they certainly feel strikingly close to it. I was only whining earlier this month about how tired I am of this sexy fascination with and idolatry of fucking awful men, and Rob Zombie, it seems, agrees with me on that one.

As always, Zombie collects a collection of character actors to play with: Dee Wallace shines as a sneering, sadistic prison guard, while Jeff Daniel Philips as the coked-up, toxically masculine Warden repulses from beneath a panto moustache. Danny Trejo (obviously), Daniel Roebuck, Austin Stoker, Clint Howard, and even a tiny cameo from my absolute queen Dot-Marie Jones round out the exquisite cast of underuseds.

While it does feature some of Zombie’s by-now trademark splatter violence, 3 From Hell is really more a hangout movie than anything else. I’ve seen some reviews calling it a pointless sequel, which, well, yes, it is, if you happen to find these characters boring; if you like spending time with them, then you’re in for a treat, because this is more or less just a couple of hours of catching the craic with the Firefly family. Cheerfully repulsive and unapologetically awful, there are times when just chilling with them is kind of dull, but sometimes, when the movie hits it’s groove and Moseley and Brake are arguing over who is Cagney and who is Bogart, it’s downright delicious.

Not to mention the fact that I have always loved the way Zombie constructs his movies. There are some really beautifully-directed sequences in 3 From Hell, the kind that the anti-Zombie elite would like you to believe aren’t actually there: Baby’s assault on her pursuers with a bow and arrow is just lush, and Zombie often finds ways to contrast the vileness and dirt-under-the-nails feeling of his characters with vibrant, eclectic, and beautiful mise-en-scene.

Is this a good movie? I don’t actually know. There are aspects of it that I can defend from a critical perspective, just as much as their are aspects that are easy to deconstruct as stupid and pointless. I can say that I enjoyed it – I think. It’s probably going to be on my best of the year list, and my worst, too. There’s just as much to like about it as there is to hate, just as much to deride and dismiss as there is to inspect and analyse. And, once again, I’m left with no better understanding of why I still consider Rob Zombie my favourite director. A decade after I discovered him, I’m still trying to figure it out. 3 From Hell didn’t help elucidate much. But hey, at least I enjoyed the ride, right? Right? Right?

If you enjoyed this article and want to see more stuff like it, check out the rest of our spooky Halloween season, and please consider supporting us on Patreon. You can check out more of my work on my personal blog, The Cutprice Guignol!

(header image via Consequence of Sound)