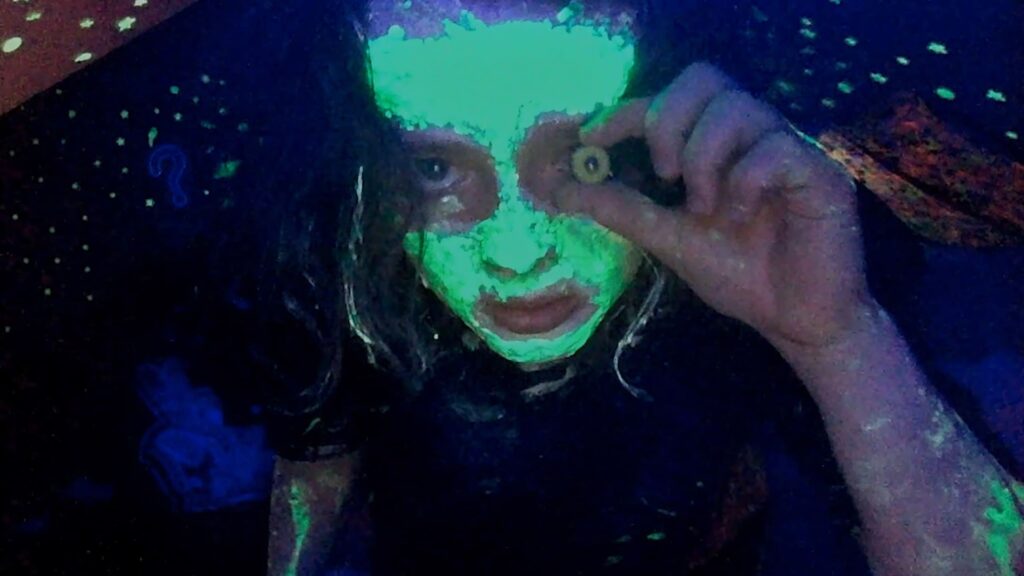 As soon as I heard about We’re All Going to the World’s Fair, a horror movie from newbie director Jane Schoenbrun based around an online role-playing game, I knew I was going to love it. Spoilers ahead for the whole movie, which I really reccommend watching before you read any more of this article.

I’m a huge fan of ARGs (alternate reality games – here’s a good run-down for beginners) and horror role-playing games online, and have spent a non-insignificant part of my twenties up to my ears in theories, forums, videos played backwards at just the right frequency to catch the exact message the creator wants to put across. I wrote about it a few years ago, in fact, with regards to how it’s taking the place of found footage in new media settings. But We’re All Going to the World’s Fair is a film that doesn’t just mine the rich territory of online cyber-mythology for horror, but explores exactly what appeal it has to draw us to it in the first place.

The movie follows Casey, a teenage girl, as she enters into the “World’s Fair challenge”, an online horror game/ARG that promises to let players “change” as soon as they begin their journey. Casey begins uploading videos of her experiences after she takes the challenge, and she soon makes contact with JLB, a man deeply involved with the challenge and apparently determined to guide Casey through it unscathed.

The kind of lore created around ARGs and other online role-playing games is unique, in that it allows for pretty much any user or viewer to insert themselves into it. Even at the entry level, just watching them, most require the viewer to come up with some level of their own interpretation, but many ask for active involvement – communicate with this Twitter account, perform this action, go to this place at this time. The people watching and consuming this art can actively shape how it moves forward – one of the many aspects of these stories which makes them so unique and compelling.

And that’s exactly what World’s Fair sets out to explore. Casey (played by the brilliant Anna Cobb, in what is sure to be a star-making turn for her) starts off the film aching with adolescent loneliness – we don’t see anyone else interact with her in real life aside from her father yelling at her through the bedroom door, her search for comfort and connection mostly coming via ASMR videos and other internet oddities. It makes perfect sense, then, that she finds herself drawn to the World’s Fair challenge; not just because it allows her an opportunity to engage with a community beyond herself, but because it allows her to insert herself into the story, too, to become an inherent part of the mythology around this role-playing game. To finally see herself somewhere, and be recognized by other people as belonging there, even if it’s through the lens of nu-metal headbanging in her bedroom.

It’s that which makes World’s Fair such an excellent movie, to me – the recognition of these stories as a place where people can come to be seen and acknowledged, where they may lack it in their real life. Casey plays out a myriad of slightly cringe-inducing teenage ideas of horror movies, liberally lifting from Paranormal Activity and other influential 2010s movies of the genre, testing out storytelling and scares and all the sinister implications she can think of as she uploads shaky-cam videos to her channel. There’s nothing to the World’s Fair game other than what people give to it, and Casey is trying to give enough of herself to be seen, at last, by someone else.

Which makes the final act – of Casey’s World’s Fair guide JLB breaking the rules of their game by admitting it’s not real – even more poignant. The game is over at once, and any connection created as long as it lasted is gone with it. Even if the story that surrounded it was false, a creation of the handful of internet users engaged with it, the tentative search for connection within it was real – and that’s what’s lost by breaking the immersion of this reality.

The horror in World’s Fair is not the creepy horror game running riot around a group of unsuspecting teens, it’s the deep loneliness that can find a home in these small, niche corners of the internet, with nowhere to go when they end. Jane Schoenbrun isn’t using this story as an excuse to prod at nerdiness or those who find solace in internet culture as freakshows or monsters, but rather, exploring the strange, poignant places online communities can take us – and the respite they can offer, for as long as everyone involved is willing to keep up the charade.