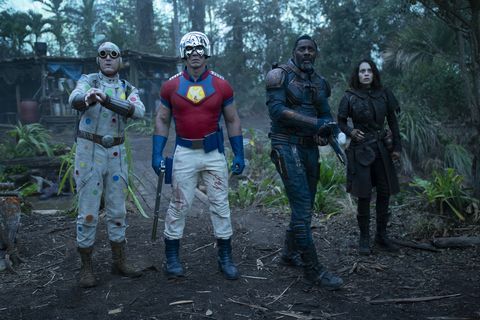 I promise that this blog is going to be about things other than the DC cinematic universe soon. I promise. In the meantime, though, let’s talk about that first The Suicide Squad trailer.

First off, if DC and Warner Bros. as a whole has learned anything from the Snyder Cut fiasco, I hope that it’s this: let a director make the film they want to make. The first Suicide Squad (which I still consider an affront against me personally) movie was such a failure, in my opinion, because it felt like a film by committee; a collection of different tones, stories, ideas, and characters mashed together in a way that was meant to satisfy everyone, but instead just served to disappoint the lot of us, instead (unless you like looking at Margot Robbie’s torso, in which case, bully for you, I guess).

Anyway. Bringing on James Gunn in the wake of the grand firing fiasco is pretty much exactly what they should be doing: Gunn has previous with making irreverent, offbeat movies in the superhero genre with Guardians of the Galaxy, plus a particular point to prove after his controversial canning from the MCU. If production are sensible with this one, they’re going to give him free rein to make the movie he actually wants, as opposed to the one that they think their audiences do. They tried that already, and it landed us with…well, you know.

It’s coming out of the gate swinging with a bloody, gory, sweary, Idris-Elba-With-His-Real-Accent attitude, and I hope that’s what it sticks to. If you’re going to do this kind of anti-hero story, you have to be able to embrace the, you know, anti-heroism at the heart of it. I think James Gunn will suit this down to the ground – in fact, I wouldn’t be surprised if Guardians ends up looking pretty sanitized in comparison to this, and how the two sets of films are going to be compared as a result. If you get chucked from Disney for being too much of an edgelord, your next film better live up to that, you know?

And the trailer itself looks like a really good chance to take advantage of some of the excellent cast members of the original movie (well, and Joel Kinnamen) and stir them up with some new additions (like Michael Rooker who, in this house, we stan) to rescue the good stuff and retool the bad.

It’s so good to see Margot Robbie’s Harley Quinn again, divested of the vapid sex kittenry of her original iteration and rocking a far more fun post-Birds-of-Prey vibe, and, while I’m not sure that Viola Davis should have to come back to these movies after putting up with Jared Leto while shooting the first one, she’s a tremendous actor perfectly cast as Amanda Waller, and I’m looking forward to seeing what she does with this. I appreciate what look like some actual attempts at make-up artistry and real costumery (after how blandly ugly and unreal everything in the new Justice League seemed to be), especially for Peter Capaldi’s return to full-blown and well-earned villainy after that brief dally in decency, but there’s no denying that King Shark is also here and that he looks like a battery-powered rubber doll of himself, so there’s that, too.

Overall, I’m pretty confident about Gunn’s ability to pull The Suicide Squad out of the bag – hopefully, DC have learned their lesson about studio interference and letting a well-liked director do their own thing, and with a fit as good as Gunn for the project, it’s looking up. And hey, if worst comes to worse – we can always just release the Ayer cut, right? Right? Right?!