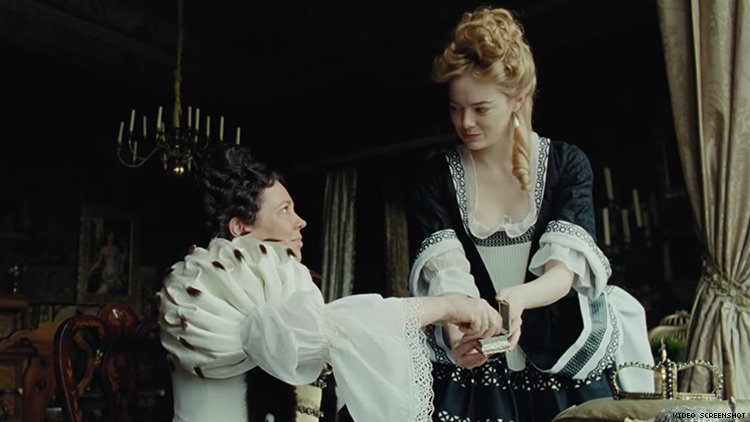 Yorgos Lanthimos’ English language debut, The Lobster, announced the Greek director as one of the most singular filmmakers working today – a title the director backed up with his arguably weirder follow-up, The Killing of a Sacred Deer, which was one of Louise’s films of 2017. The Favourite is a slight departure from Lanthimos and his previous works – leaning away from the weirdness with a less overtly-stylised script and style, and turning the trademark dark comedy up to eleven to make sure things don’t get too pedestrian.

Set during the reign of Queen Anne, played by the wonderful Olivia Coleman, The Favourite charts the growing romantic triangle between Queen Anne, her secret companion Sarah Churchill, Duchess of Marlborough (Rachel Weisz), and the devilishly conniving Abigail Hill (Emma Stone). It’s a sumptuously rendered world of the upper-upper classes, where women wielded the political sway and men could only aspire to look as pretty (and powerful) as them, symbolized to perfection by delightfully foppish Nicholas Holt as Robert Harley, 1st Earl of Oxford and Earl Mortimer.

While The Favourite is easily Lanthimos’ most user-friendly film to date, it’s rife with his Lanthimos’ textboot venomous plotting and typically fantastic performances from Coleman, Rachael Weiz, and Emma Stone that serve to elevate this pitch-black comedy to insta-classic level. For anyone who looks at costume dramas and turns their nose up thinking that they are boring, dull, and awfully dressed, The Favourite has enough modern surrealist anachronisms, and perhaps the funniest use of profanity I’ve heard since I was introduced to the concept of swear-wolves by Taika Waititi all those years ago, to survive even the most period-critical audience. Really, the movie feels like an eerie companion piece to All About Eve (finally, we as cinema-lovers have a replacement for Showgirls).

The central rivalry between Sarah and Abigail is enough to make any film worth watching, with both actors putting in career-best performances. While Lanthimos’ previous film took its inspiration from Greek mythology, The Favourite takes its cues from Christianity. What is Abigail but a devil (her self-described title of fallen woman backs this up) who sees the crack in Anne and Sarah’s relationship and tempts Anne to her side? Emma Stone finds more than the simple devilish seductress here, curating emotional closeness and exploiting Anne’s infantlized stature, even as a monarch. Of course, it is Sarah’s method of love that has kept Anne in an almost child-like need of her, but children’s attentions can sway when they start getting what they want, and watching the power shift between these three women is constantly unsettling and gloriously well-realized.

But the obvious star of the show is Olivia Coleman. Since her breakout role in Tyrannosaur, the former Peep Show star has excelled at taking stock characters, like her role in Broadchurch, and imbuing them with a sense of tragic humanity, deep warmth, and even, especially here, wit.

The same can be said of her turn as Queen Anne. In Coleman’s hands, Anne is both broadly comic – her tantrums both side-splitting and a little scary – and effortlessly moving. In one scene, as Anne is looking on at a party while confined to a wheelchair, and without a word Coleman turns Anne’s revelry to distraught anger as she realizes that she can’t connect to the world that she is supposedly in charge of. It’s a towering performance, and if she doesn’t add an Academy Award to her huge trophy cabinet then I don’t want to watch movies anymore. There’s a tantrum worthy of our Queen.

If you enjoyed this article and want to see more stuff like it,  please consider supporting us on Patreon.