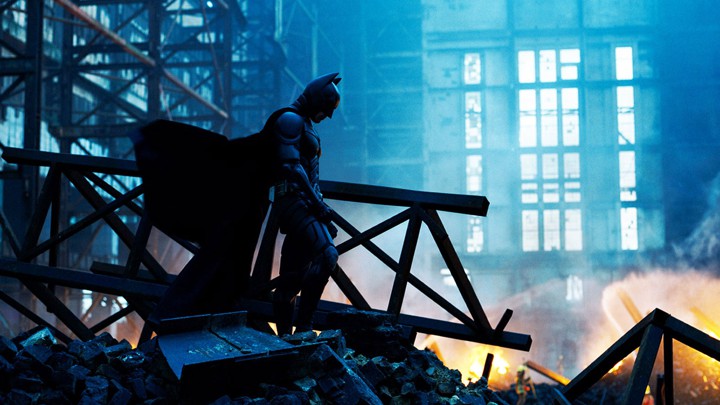 The Dark Knight’s reputation speaks for itself.

It’s still the best superhero film of all time, despite the best efforts of the MCU, and will feature near the top of best films of all time lists for the rest of recorded time. In the ten years since its release nearly every aspect of the film has been analyzed with a fine-tooth comb to the point where you can basically predict the content of each article. Yes, it’s the first proper post-9/11 superhero film, it owes a huge debt to Michael Mann’s Heat, Heath Ledger is amazing, and it’s the last hurrah of superhero films basing their thrills on as much practical effects as possible. The discourse around this film is so recognizable that the question becomes: can I add anything new to this discussion? Of course, I bloody hope so – even if what I write about this film is similar to what’s already out there, there is still that personal touch of what it is about The Dark Knight that speaks to me, what it means to me as a movie, and how it changed how I look at Batman and his world in general.

The main thing I want to discuss is the idea that at the end of The Dark Knight, despite the desperate efforts of Batman and the newly promoted Commissioner Gordon, the Joker wins. This is an opinion that I haven’t came across in my research with most critics choosing to see Batman taking the blame for Harvey Dent’s killing spree as some kind of triumphant moment, an opinion that is surely based on the tone of Gordon’s movie-ending speech as well as Batman’s spiel about being the hero Gotham needs right now.

In order to unpack this ending, we need to look at the architect of all of this destruction, the Joker. The Joker absolutely dominates this film despite only appearing in about twenty-eight minutes of an over two-and-a-half-hour runtime. His plans and machinations bring Gotham to its knees and challenges not only the status quo but also the very effectiveness of Gotham’s two very different heroes: Batman and Harvey Dent. The Joker and Harvey Dent have the exact same role as Batman did in Batman Begins – both enter the film and tear up the new reality of a Gotham that is defined by the Caped Crusader. The Joker, like Batman in Batman Begins, inverts the very nature of Gotham.

He does this in a variety of ways. With a method to his madness, the Joker doesn’t even go after Batman first, he goes after the mob by robbing their banks. He does this in a manner that is the complete antithesis of Batman. He perpetrates the crimes during the day, knowing that Batman works at night, imbues his crew with the greed to knock each other off when their usefulness runs out, and, and this is pivotal, unmasks himself at the end of the heist. Unlike Bruce, who is hiding behind the mask for his own noble reasons, The Joker doesn’t care who knows him – in fact, he wants to be noticed. In doing this he gets the attention of all the mob bosses in Gotham, who have their meetings during the day because they are afraid of Batman. This is merely the start for The Joker, a platform for him to take over the city while clearly enjoying his growing rivalry with Batman. He’s a terrorist without a code or a creed, and as Alfred says, he just wants to watch the world burn.

Harvey Dent, on the other face, is placed not as the ideological opposite of Batman, but as a possible reason for Bruce to hang up the cape and cowl. Harvey, with a little help from Batman, Rachael, and Gordon, is able to take half of Gotham’s criminals off the streets without resorting to vigilantism. He’s Gotham’s White Knight but he is also a painful example of why Bruce’s methods as Batman are so necessary. Unlike Bruce, who uses Batman not only as a symbol for justice but also a way to hide his identity to keep his loved ones safe, Harvey is out there on his own, without an alter ego to protect himself or Rachael. Even before the Joker sets his sights on him, Harvey is nearly killed in his introductory scene by a mobster who snuck a carbon-fiber gun into the courtroom. In record time, Harvey becomes a bigger thorn in the side of Gotham’s criminals that Batman.

This obviously makes Harvey, as well as Rachael, a target for the Joker, but that doesn’t stop Harvey from doing what he thinks is right, including masquerading as Batman to flush the Joker out so the real Batman could capture him, which leads to perhaps the greatest sequence in action movie history (from the time the van door shuts on Harvey to when the Joker pops his head out of the police car window. Solid cinematic gold).

It’s Harvey’s transformation into Two-Face that is the key to the Joker’s success. By destroying Harvey by using the system that he is fighting to protect, he and Rachael are kidnapped by two of Gordon’s detectives, which lead to Rachael’s death and Harvey’s disfigurement, the Joker sets Harvey lose on those perpetrators, who include Batman and Gordon. The Joker conducts his social experiments: including setting the citizens of Gotham on a rabid hunt for a Waynetech employee otherwise he blows up a hospital, y’know, for fun, while Harvey is murdering policeman, mob bosses, and kidnapping Gordon’s family.

Again, this I why The Dark Knight works so well. Both Christopher Nolan and his brother Jonathan craft what is basically a morality play with superhero set dressing. It’s biggest influence in this regard is Alan Moore and Brian Bolland’s seminal comic The Killing Joke. In The Killing Joke, the Joker makes an argument that anyone is just one bad day from becoming him. In the comic he tests this theory out on Commissioner Gordon by torturing him physically and psychologically and by famously crippling his daughter Barbara. In The Dark Knight, it’s Harvey that has the bad day that proves the Joker’s point. As Batman said, Harvey was the best of them and if his crimes were discovered it would undo all of his good work for the city. The key to Harvey’s transformation, apart from a shitload of dynamite, is the death of Rachael. We are given a glimpse of Harvey’s dark side when he’s interrogating one of the Joker’s lackeys as he threatens to kill him, something which Batman puts a stop too. With Rachael murdered Harvey is driven insane by grief and the Joker sets him loose. Yet Harvey, at the end of the day, is merely a pawn in the Joker’s battle with Batman.

The Joker himself is the embodiment of chaos and escalation, and the Nolan brothers, and Heath Ledger, put a phenomenal amount of work in to distinguish this version of the Clown Prince of Crime from his past iterations. He has made Harvey his target, but the long game is about Batman. He says as much in the interrogation scene: Batman has one rule, that he doesn’t murder criminals, and The Joker pretty much promises Batman that he is going to break it. And what do you know, he was absolutely right.

The Joker is such a great villain for the very simple reason that he drives every part of the script, with his crimes and the consequences of his actions haunting the film even in the scenes where he doesn’t appear. What Batman achieved in Batman Begins, taking the League of Shadow’s plan to destroy Gotham and instead making the city hopeful of a brighter future, the Joker turns this plan in on itself. His aims are remarkably simple – bring Batman and Harvey Dent down to his level- and he does just that. As a result of this, The Joker changes the rules of the blockbuster third act. Where every other superhero movie has the hero and villain face off in an explosive fight, the fight between the Joker and Batman is merely a distraction.:

“You didn’t think I’d risk losing the battle for Gotham’s soul in a fistfight with you? No. You need an ace in the hole. Mine’s Harvey…I took Gotham’s white knight and I brought him down to our level. It wasn’t hard. You see, madness, as you know, is like gravity. All it takes is a little push!”

It’s not hard to hear the Joker laughing all the way through The Dark Knight’s proper final confrontation, as Harvey, who is now very much Two-Face, relies on the chance of his lucky coin as the method in which he, Batman, and Gordon pay for the actions that led to his life being destroyed. The final zinger is that in order to stop Two-Face, Batman breaks that one rule and kills him before he shoots Gordon’s son, and then decides to take the blame for Two-Face’s murders to protect the work that Harvey had achieved.

In the short term this stops the Joker’s masterplan, but it’s built on a lie. At the end of the movie the Joker is responsible for the fall of two knights, the White Knight and the Dark Knight. The city that began the film supporting Batman now hunts him like the very criminals he swore to fight. This is not a victory, this is a short-term fix. Bruce is no longer Batman at the end of this film, he gives up crimefighting for eight years until Bane comes to town, and that fragile peace that is dependent on this lie is just waiting to be broken.

The Dark Knight is a classic because it challenges the predictable narratives of superhero movies. In Nolan’s Gotham the fight isn’t about who lands the best punch, it’s about trying to maintain the belief that Gotham can be saved. In the Joker Batman and Gotham have met their match with the only way to defeat him being to cover up their own mistakes, mistakes that a huge guy in a scary mask can use against them.

If you enjoyed this retrospective, please be sure to tune in next week for our look at the first Christopher Nolan entry into the canon. You can also take a look at our other cinematic universe retrospectives, for the Marvel Cinematic Universe and the Jurassic Park movies! And, as ever, if you enjoyed this and want to see more stuff like it, please consider supporting us on Patreon.

(header image courtesy of The Atlantic)