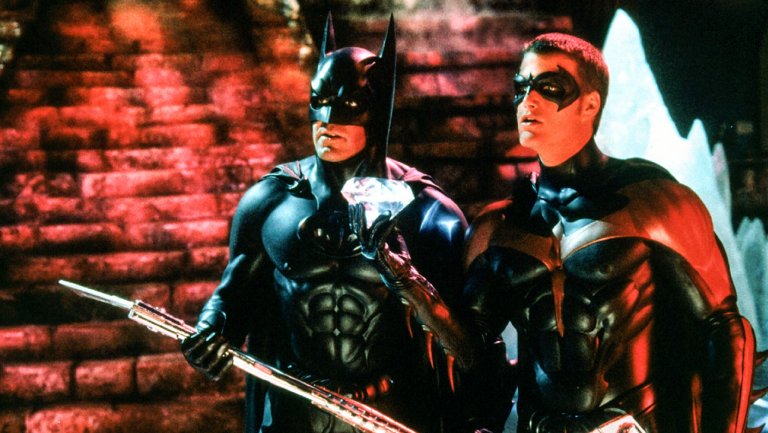 Batman and Robin may be the most infamous Batman movie in the entire canon. It’s The Dark Knight of bad movies: filled to breaking point with puns, continuity errors, and some basic story-telling mistakes that no movie should ever have gotten away with. Even so, Batman and Robin is arguably (and there will be arguments about this) a better movie than Batman Forever. Batman Forever’s failure was that it couldn’t decide whether it wanted to be a character-driven action movie in which we get an illuminating glimpse into the hero’s psyche, or an advert for toys. Batman and Robin is absolutely fine with being nothing more than a hyper-gurning piece of product placement, making it a more tonally consistent movie that its predecessor.

Despite this, it’s easy to understand why Batman and Robin killed the Caped Crusader’s first franchise. Beginning with Tim Burton’s Batman, Batman and Robin completed the transformation of Batman from dark avenger to a caricature that even Adam West would call a step too far. Because of this, many would award Batman and Robin the title of Worst Movie of All Time, something that gained even more traction when Batman Begins successfully rebooted the character, but like the 60s TV show, the reputation of Batman and Robin has gotten a little stronger over the years.

Don’t get me wrong, this isn’t an eventual-classic like Citizen Kane or Blade Runner, not by a long shot – in fact it’s still a pretty terrible movie – but it’s now firmly in the category of so bad it’s good.

Okay, good is also a stretch. Let’s just say that it’s better than, say, Justice League. So, what’s to like about Batman and Robin? Honestly, there isn’t a whole lot that is particularly great here. It’s an entertaining movie in the way that The Room is entertaining – what is enjoyable is also part of the problem.

Let’s start with the characters. Batman and Robin has the worst version of Batman in the series so far. George Clooney is a truly terrible choice to play Bruce Wayne/Batman, as most of his performance is smiling and failing not to smile. This is a happy Bruce Wayne, with a long-term girlfriend and a tricksy partnership with Robin. Now, both of these relationships would be a good source of drama in a normal movie but Batman and Robin fucks things up on both counts.

The girlfriend, played by Elle McPherson, is barely a presence in the movie, and never gets close to Bruce’s identity, or is put in any danger – so why the hell is she there in the first place? We’ll get to that. Then there is Robin. I’m going to put forth a very controversial opinion: Robin might be the best character in this movie. I know, but hear me out. Robin has a genuine beef with Batman who, despite Robin saving his life, is constantly keeping him at arm’s length. Dick has a genuine right to be angry here, and while his obsession with Poison Ivy is stupid, it does exacerbate the growing instability of the core partnership. Robin also makes being a superhero actually look like fun, and not in the sense of perma-grinning George Clooney.

It’s a true mark of the quality of this movie that the thematic throughline is so badly handled. Batman and Robin’s story, if it even has one, is about Bruce’s connection to an ever-growing family. The girlfriend makes no impact because she doesn’t feel like a part of this: she doesn’t share any scenes with Alfred, Dick, or Barbara – but her function in the movie is still grimly obvious. She is there to block any questions of a gay relationship between Bruce and Dick, something the comics had been doing for years. Then there is the problem of failing to trust Dick. In a competent movie this would be fixed by putting Bruce into a situation where he has to trust Dick with his life. This doesn’t happen. Instead, Dick is told for the umpteenth time that Bruce is right, this time about the effect that Poison Ivy has had on them both. This is just another example of Batman’s way or the high way – no lesson has been learned here, no characterization drawn.

What about the Pennyworths? Bruce has no relationship with Barbara, Alfred’s niece and this movie’s Batgirl, in this movie. Despite becoming a third member of the team, Dick and Barbara have more of a connection than Batman and his step-cousin. Apart from the final battle Bruce doesn’t share a scene with Barbara out of costume. Instead we just have a retread of Dick’s joyriding scene in Batman Forever, only this time Dick saves Barbara. I’ll give Batman and Robin this though: as bad as this version of Batgirl is, we are still given contextualizing scenes of her prowess on a motorbike, her self-defense skills, and her computer expertise before she dons the suit. Batman Forever failed to do the same for Robin as a scene showing Dick’s fighting skills was left on the cutting room floor.

One relationship that almost succeeds in making me give a shit is the illness of Alfred. This does have some impact because of how much I love Michael Gough in the role, as he was an ever-reliable presence as the films got worse. The problem here is that despite this being the fourth movie in this continuity, this is the third Batman, and Clooney can’t imbue this relationship with the shared experience and chemistry of someone like Michael Keaton. And Clooney also can’t stop fucking smiling, even when the news is awful.

The villains are no better, though they are much more fun than The Riddler and Two-Face. Mr. Freeze is a classic example of misunderstanding what makes a character interesting. This version of Victor Freeze is heavily inspired by the Batman: The Animated Series incarnation, with the sick wife frozen near the point of death, but they forgot to play up the human tragedy of the whole situation. There’s the frequency of the puns – this guy must have been a hoot in med school, seriously – but the worst thing about Mr. Freeze is that he is ordinary. Unlike Catwoman, or even The Penguin to a certain extent, there is no sympathy to be found in this character. Despite his tragic circumstances he seems like he’s having a blast, even making his henchmen sing a song about being chilly. The animated series is first and foremost a kid’s show, but its version of Mr. Freeze is more mature than the one played by Arnold Schwarzenegger at peak nineties camp.

Uma Thurman fares a little better as Poison Ivy but only because she is the biggest exaggeration of a femme fatale character I’ve ever seen. Thurman is clearly having a ball, even if her character continues the Schumacher movie’s habit of thinking of women as nothing more than objects, evil, or trophies (or all three at once). Batgirl is supposed to counteract this (Clooney’s Batman even calls the name out for not being very PC) but this is just screenwriter Akiva Goldsman’s clumsy attempt at addressing the situation only to turn into yet another case of lampshading over making meaningful changes to the depiction of women in the series thus far.

What stops Batman and Robin from being as bad as Batman Forever is that it seems to reach the tone it’s going for. Schumacher is famously quoted repeating to the cast and crew to “remember, we’re making a cartoon”, and that is exactly what Batman and Robin is. It has Looney Tunes sound effects for pratfalls, the heroes go home and change before the final battle despite there being a clear time constraint after Gotham is frozen, and the villain’s goals don’t mesh at all. At the end of the day what we are left with is the movie equivalent of a Happy Meal toy. You really want it, have fun for a little while when you get it, and then realize that it’s actually a bit shit.

If you enjoyed this retrospective, please be sure to tune in next week for our look at the first Christopher Nolan entry into the canon. You can also take a look at our other cinematic universe retrospectives, for the Marvel Cinematic Universe and the Jurassic Park movies! And, as ever, if you enjoyed this and want to see more stuff like it, please consider supporting us on Patreon.