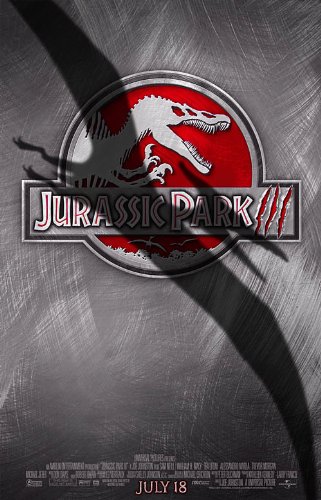 Jurassic Park III is the kind of movie that seemed doomed before it even got close to cinemas. Its predecessor, The Lost World, had been a commercial hit but the victim of lukewarm critical reviews and a lot of questions about the need for more Jurassic Park movies. Steven Spielberg was checked out of directing another movie by the end of The Lost World’s production – when asked about another sequel, he said that the thought of another Jurassic Park movie gave him an “Advil headache” and hell, even John Williams didn’t come back to score this entry into the franchise.

CGI was on the rise in a major way, and the release of blockbusters like The Phantom Menace had left real effects, the heart and soul of the original movie, looking old-fashioned and behind-the-times. Joe Johnston (of The First Avenger fame), who stepped in to take over directing duties, was no slouch in the credentials department (as well as directing Jumanji, he also served as art director on a couple of the Indiana Jones and Star Wars movies), but had a big old script problem to deal with, since Spielberg has tossed a bunch of stuff he’d originally planned to keep for Jurassic Park III into The Lost World after deciding he wouldn’t return to the franchise (the rampage in San Diego was meant to be a holdover for a predicted third movie, and would have a hell of a lot more sense there too).

As the movie went into production, Joe Johnston had to grapple with a couple of unsatisfying scripts (one of which revolved around a bunch of teenagers washed up on the island and that Johnston described as a “bad episode of Friends”), but eventually the studio settled on a dino-centric detective story that would see creatures escaping from the island and committing a bunch of killings on the mainland as various groups tried to figure out the mystery, despite both Spielberg and Johnston expressing concern over the complexity of the story.  With stars signed on, sets built, and eighteen million sunk into the movie, Johnston and Spielberg intervened to scrap the escapee dinos script at the last minute, pulling in screenwriters Alexander Payne (yes, Alexander Payne of Sideways and The Descendants fame) and Jim Taylor to write a whole new script a mere five weeks before shooting began. This one was to revolve around a divorced couple (played by William H Macy and Tea Leoni and yes, since you mention it, there is almost twenty years between them) as they connived Sam Neill’s character to return to the island to help them find their missing son, while other members of the mission secretly attempt to acquire some of the research left on the island and bring the wrath of the remaining dinos down on the group as a result

And honestly, telling you all this is a disclaimer, because you know as well as I do that Jurassic Park III is the weakest of the original run of Jurassic Park movies. The production was a mess from the start and it’s all over the finished product: the character development is near-nonexistent, a returning Sam Neill seems grimly checked out for most of the movie’s run, the mesh of CGI and real effects generally leaves both looking tacky and cheap. This feels like a movie that was tossed together at the last minute right down to the casting of early-noughties gravemarker Tea Leoni. It’s an overstretched ninety minutes, struggling with pacing and to sustain a story that’s really too simple for a film this long. Even I remembered being disappointed with it, and I saw it when I was half a dozen years old (I had to confirm that I’d seen it at the cinema with my mum, who reminded me that my dad took me, most likely because he’s a die-hard William H Macy fan and will watch him furrow his brow in anything). Honestly, this was the movie I was most dreading coming back to, because it felt like just a waste of an afternoon to sit through this flick again.

And you know what, yes, there is a lot of shit in it, as I outlined above. The character development is the most heinous part of this – oh, and the attempts to make me want to bang Alessandro Nivola (of You Were Never Really Here fame, funnily enough) when Sam Neill is right there. But, with expectations low, I have to admit that there’s quite a lot in Jurassic World III that I like.

The special effects are poor compared to the previous two movies, no doubt about that, but Joe Johnston rolls with the punches as best he can, obscuring dinosaurs in mist and fire and smoke and rendering them actually scary as a result; it was a bold choice to move away from the T-Rex as the main antagonist of the franchise, but it works here as the Spinosaurus distinctive design seperates it as a monster. And while the special effects aren’t up to a huge amount, Johnston knows how to handle his action – the sequence in the aviary is genuinely inspired and has a great momentum to it, while the final confrontation with the Spinosaurus in the ocean has a suitably epic feel. Considering this is the early noughties and this movie features a child lead, you’d be right to fear the worst, but the film sidesteps the usual nightmare whinery with a kid who’s smart, self-sufficient, and brave (and satisfactorily performed by Trevor Morgan). The parallels between the Velociraptors searching for their eggs and the parents hunting for their child are obvious and an, uh, interesting choice for the thematic parallel, but it’s a genuine attempt to draw stories together in a satisfying way without just spelling it out for the audience and I can respect that.

Look, I’m not going to sit here and tell you that Jurassic Park III is a great movie, because we both know that it’s not. But I think, when you add the disclaimers of the chaotic behind-the-scenes production, it actually stands up pretty well. This movie was cursed with a difficult release, as Jurassic Park as a film was really just beginning to sink into it’s place as an influence on moviemaking as a whole and within the history of film, but was still recent enough that any sequels could expect direct comparisons between the two. But when you shift back from that, it’s clear to see that Jurassic Park III is a genuine attempt  from Joe Johnston to deliver on some new dinosaur action. Is it perfect? Far from it. But it’s also not nearly as bad as you remember, and is well worth another watch if you want to see Sam Neill look slightly bored as he’s surrounded by Velociraptors.

If you enjoyed this article and want to see more stuff like it, consider supporting us on Patreon, and check out our Marvel Cinematic Universe retrospective! You can also find more of my TV-related work and personal writings on my blog, The Cutprice Guignol.