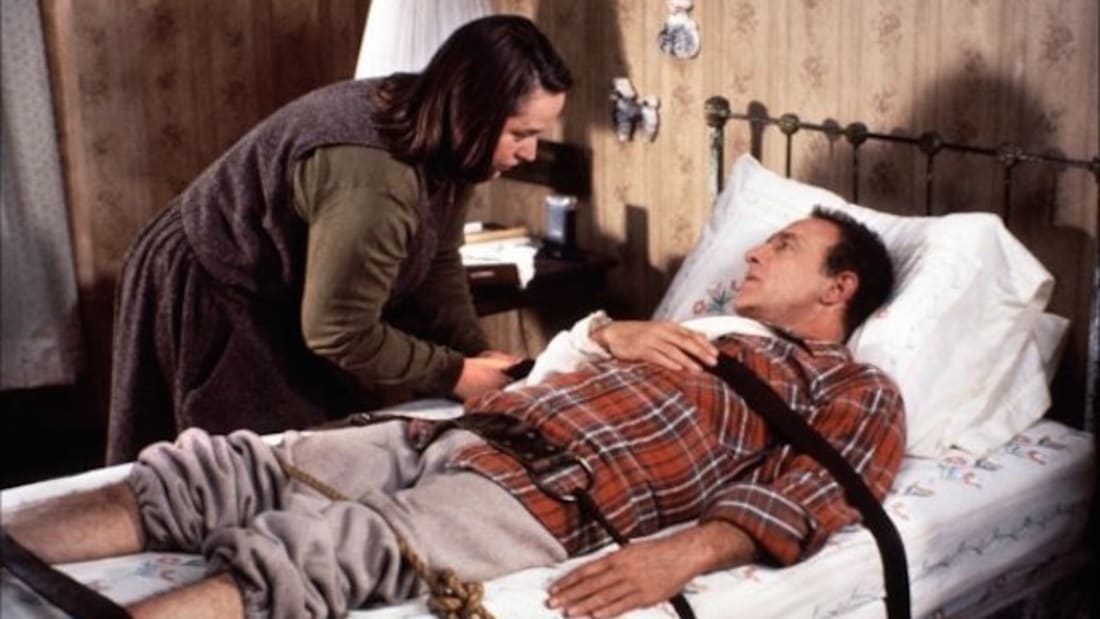 A Cinematic Guide to Stephen King

It’s the beginning of October, our favorite month of the year here at No But Listen, as it gives us an excuse (like we need one) to talk about all things horror. With Halloween looming on the horizon it’s clear that movie fans the world over need some recommendations for spook season. What better place to start than with the King of Horror himself, Stephen King? While not a filmmaker, trust me if you’ve seen Truckers then you know that’s true, King is perhaps the most adapted novelist of modern times. There have been some classics, some steaming buckets of grey water, and some downright extremely strange movies based on Kings work, so let’s take a look at the best, the worst, and the…rest.

While the views on The Shining on this website are – let’s say conflicted, the writer who loves it is currently writing this list. So, I win. The truth is that I don’t need to tell you to watch this movie, you already have, but Halloween is not complete without a visit to the Overlook Hotel.

It’s definitely premature to call these movies classics but the only thing standing between them and that title is time, and I don’t need to wait five, or ten, or fucking fifty, to tell you that these movies are the real deal. What more could you ask for with a brilliant cast, both young and old, a story that is faithful when it needs to be and does its own thing when the book doesn’t cut it, and in Pennywise, a modern movie monster to rival Freddy Krueger in how creative the filmmakers can be when he’s on screen. Just don’t fucking franchise him to death, Warner Bros – you’vebeen warned.

Unlike my impression of an overloaded hype machine for the previous entry, I don’t hold Misery in as high regard as most. As an adaptation of the much more brutal novel, Misery short-changes us in terms of James Caan’s writer in peril, Paul Sheldon. Without the inner monologue of this character, Paul is a limited protagonist. That’s the book fan in me talking, since fixing my problem would have meant a lot of tedious voice-over. The film fan in me see’s that Rob Reiner’s fan-from-hell-movie is a brilliant piece of horror cinema, anchored by the Oscar-winning Kathy Bates as the demented Annie Wilkes. This is the rare King classic that is more psychological than supernatural, which means it just edges Carrie on this list.

For some reason, David Cronenberg’s adaptation of The Dead Zone is often forgotten when discussing the King movie canon. Which is a shame, as the director’s singular take on the material, and the strangely brilliant casting of Christopher Walken as a traumatized telepath, is more topical today than it was in the eighties. While Cronenberg’s adaptations of the more “literary” works of William Burroughs and JG Ballard are more disturbing, they don’t have a pre-West Wing Martin Sheen hamming it up as a psychotic politician, and therefore can’t claim the same kudos that The Dead Zone does.

You know what the current boom of King adaptations needs? More Frank Darabont. No other director is as connected to the author’s work, with brilliant films like The Shawshank Redemption and The Green Mile considered some of the best movies of all time. But, since it’s Halloween month, let’s go for the unbridled misery (mind the pun) of The Mist. A creature feature with as much Lovecraftian imagery as it does Kings own take on middle-class America, The Mist is still fantastic. While the digital effects may have prematurely aged the movie, it’s still well worth a watch. Just go and splash your face with water afterwards.

Mike Flanagan is one of the most exciting filmmakers to come out of the horror genre that don’t go by the names of Peele or Aster. Not only has this dude done his own excellent takes on the traditional ghost story (Oculus), and the home invasion thriller (Hush), he even made a blast of a prequel to one of the laziest horror movies of all time in Ouija: Origin of Evil. Next up for the maestro is the belated Shining sequel, Doctor Sleep, so why not prepare for it by watching his first foray into the works of Stephen King, Gerald’s Game. More of a locked person chiller than a locked room thriller, Gerald’s Game is basically a one woman acting showcase for the amazing Carla Gugino as she fights for survival after a sex game gone wrong causes her husband to have a heat attack. It’s a simple premise, but it’s a surprisingly cerebral watch.

Some of King’s novels are amazing works of horror fiction, and some are just batshit. The Dark Half is definitely the latter, and who better than Dawn of the Dead director George A. Romero to try and make a movie out of it. The premise is simply ludicrous: Timothy Hutton plays writer Thad Beaumont whose colleagues, friends, and eventually his family, are stalked by his evil alter ego in the form of George Stark, an entity that takes on the personality of the fake author Thad wrote as when his career wasn’t going anywhere. If you ever wanted to see a death-match between Stephen King and his own pseudonym Richard Bachman, The Dark Half is for you.

Pet Semetary (the old one)

I genuinely believe that this novel is unfilmable. How else can you explain two adaptations that should have stayed buried? That said, the original movie offers a few disturbing scenes and chills that it has a cult following that I barely understand. So, if you haven’t seen it, give it a try and tell me what the fuck I’m not getting.

Based on the short story from the collection Everything’s Eventual, 1408 has no right to be as interesting as it is. It’s not what I would call a good movie, but seeing a sceptic paranormal investigator played by John Cusack of all people go through his own version of Dante’s Inferno, well, you don’t get a lot of mainstream horror movies with that kind of ambition, even if it is bad.

What’s your favourite King adaptation? And which one would you condemn to rot in the Pet Semetary? Let us know in the comments below!