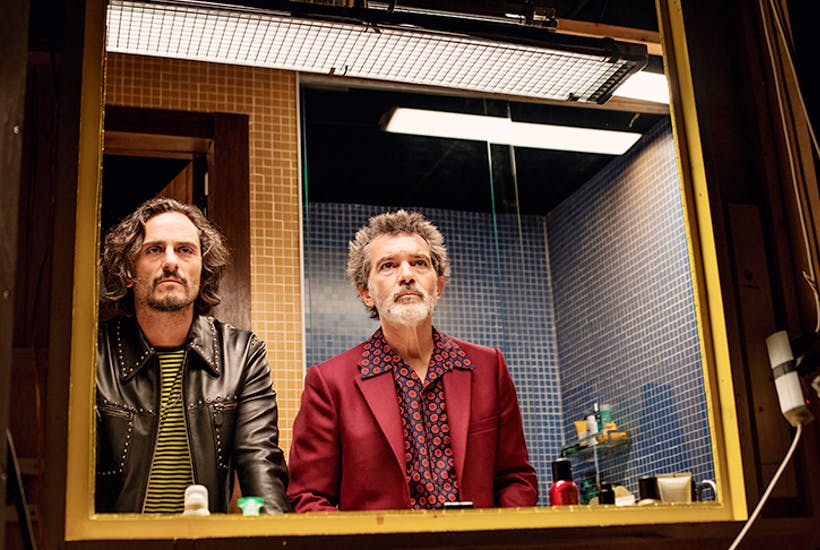 Making art about art is difficult.

Look at Once Upon a Time…In Hollywood, though I would rather pretend that it never existed in the first place; pretentious, empty, and self-serving, it’s a movie about the movie industry that disappears swiftly and irretrievably up its own meta-narrative. And it’s not the first time a movie that has tried to over commentary on art and what it means has been dealt the same fate: last year’s mighty stinker Ready Player One springs at once to mind, for example.

Enter Pain and Glory (Dolor y Gloria), the latest from iconic Spanish director Pedro Almodovar. I’ve loved Almodovar’s work pretty much since the first moment I laid eyes on Pepi, Luci, Bom: he swings between telenovela melodrama, auteur artistics, eloquent tragedy, and witty comedy of errors, all while working with a reliable stable of actors who keep on coming back to him for more because his characters are consistently so brilliant, so deep, and so rich. If you haven’t had a chance to get into his work, you’ve got a dozen brilliant places to start – Talk to Her, All About My Mother, The Skin I Live In, Volver, Broken Embraces; this is a man with an enviable back catalogue, spanning several decades of cinematic trends all while maintaining his own utterly distinct and unique voice.

Which is what makes him, I think, so brilliantly poised to make a movie that’s totally entrenched in the value of art. Pain and Glory follows a Spanish director Salvador (Antonia Banderas) in his twilight years as he tries to navigate chronic pain, depression, substance abuse, and his old relationships, all while figuring out what his artistic future looks like in the face of these changes.

I want to say, first and foremost, that I think Pain and Glory is one of the most singularly engaging bits of cinema I’ve seen this year: like so much of Almodovar’s work, it often feels like it simply rambles and wanders through the life of its lead character, but it’s really this pinpoint-accurate piece of rich emotional storytelling that’s attentive to every detail without letting on that it’s even trying. Banderas, always at his best with Almodovar (check him out in his terrifying, ice-cold performance in The Skin I Live In), is soulful, profound, and intimate; the supporting cast who drift in and out of the story (including Penelope Cruz, as his mother in flashback sequences) more than match him. The cinematography and set design is vivid, and Almodovar makes the most of the various locations that this story expands to collect – from cave houses to the bustling centre of Madrid, everything about it feels sharp, well-drawn.

But beyond that, Pain and Glory is an exploration of art. Though it follows a filmmaker, Almodovar is expansive and unpretentious about the art that he takes on: whether it’s four women singing as they put out the washing, a one-man show in an indie theatre, a priest playing the piano, a painter putting in new tiles, Pain and Glory is obsessed with making art, consuming art, and most of all, everything art can mean. And it’s not just a back-patting wankfest about how important all of this is and how special the people who make it are for creating it: it’s an at-times discomforting reminder of how art can distort and misrepresent, at how it can push people apart as well as pull them together again. Almodovar doesn’t deify or condemn here: he’s just observing, documenting, and throwing in a few jokes about the pretensiosity of filmmakers in the process so things don’t get too serious.

Pain and Glory works on a meta-level, too, as Almodovar looking back over his career through the eyes of his central character, and it’s there that the film truly shines. Because it comes from a place of real love for art, a love that Almodovar has clearly cultivated over the course of his own career. He’s not trying to stand outside the industry and offer commentary; he’s on the inside, firmly, and from that vantage point he can better see the good and the bad.

Pain and Glory is a magisterial effort from a director who has consistently proved his talent over the last thirty years of his career; this is the art about art that I’ve been waiting for. Bold, intelligent, and sharp, this is a movie that, via an intimate character portrait, takes art apart from the inside out, and does it with the utmost love.

(header image via The Spectator)