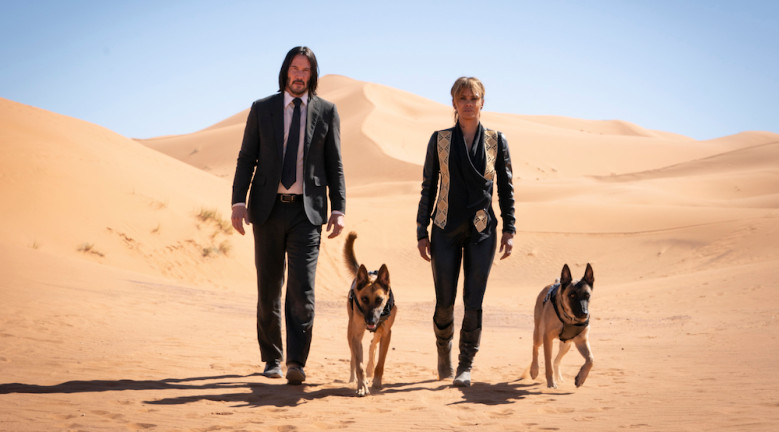 “All of this because of a dog?” asks a delightfully hammy Angelica Huston, as Keanu Reeves’ John Wick, pinnacle of the geriaction man, comes to her for help. In fairness, Angelica, that puppy was cute as fuck.

The John Wick series has been a breath of fresh air for American action cinema. The first film was a surprise cult hit made by the guys who did the fight choreography for The Matrix, and gave Reeves his fourth iconic action role of his career as the titular formerly-reformed assassin (Neo, Johnny Utah, and Speed’s Jack Traven completing the list). While it was purely a maybe that the film would get a cinematic release at all, it struck a chord with everyone who saw it – while also proving that if the guy from The Raid had a gun, that film would have been about 20 minutes long.

An overblown, and in my opinion, superior sequel followed with a slightly better villain, insane action sequences, and a few more layers of John’s shadow world of assassins peeled back. The film ended with John excommunicated from the Continental and a contract big enough to entice pretty much every killer on the Eastern seaboard to come after him. It was a superb set-up, but can Chapter 3 live up to the previous film’s promise, or is this all getting a bit too silly?

The answer is both – and it’s delightful. Not only is Chapter 3 a balls-to-the-wall chase movie, as it picks up just as the contract on John’s life is activated, it also broadens the world a bit more with the introduction of the Adjudicator (played by Billions’ Asia Kate Dillion, who is clearly having a blast), who is sent from the top to punish those who helped John in Chapter 2, and the appearance of Hallie Berry as Sophia, the boss of the Casablanca version of the Continental.

While these additions are great, and enough to buoy the film along for the most part, the story may be the weakest part of Chapter 3. This might be due to a degree of expectation that the film doesn’t meet as we are expecting a final showdown and the end of the series only to have our expectations continually subverted as we a led down the path to yet another chapter of this franchise.

While this is important, we don’t come to these films because of the story – we want to see Keanu massacre a bunch of people in increasingly ridiculous ways. On that front, Chapter 3 delivers in spades. An early fight in the New York Public library (which includes death by book, my own preferred method of murder), the action ramps up and up with an exhilarating knife fight that defies belief and had my audience in galls of laughter, to a Casablanca shootout were Hallie Berry’s dogs steal the show from their human counterparts.

What helps all of this ridiculousness go down smooth is the fact that Chapter 3 knows how ridiculous everything in the John Wick universe has gotten at this point. It takes a truly amazing action film to have an homage to The Villianess’ motorbike fight be one of the weaker fights. Chad Stahelski and his writers keep things fresh character-wise by highlighting just how famous John Wick is in his own world; the film’s main villain, or at least the main physical threat to John is Zero, played by a hilarious Mark Dacascos, who, with his crew of ninja’s spend most of their time either fighting John, telling them that they are big fans of his, or both.

While Chapter 3 may be the weakest film in the franchise in terms of story, it more than makes up with it in terms of creative set pieces. In a culture saturated by CGI wars for the planet, John Wick continues to fly the flag for one-man armies taking on skilled baddies with clearly shot action. Roll on Chapter 4.