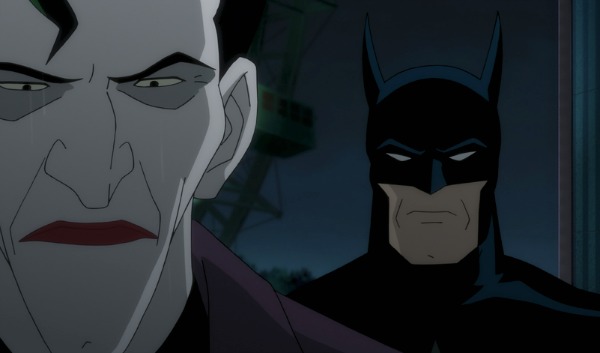 In interviews about their take on Batman, most of the directors responsible for The Caped Crusader’s cinematic output all mention the same two comics: Frank Miller’s The Dark Knight Returns, and Alan Moore and Brian Bolland’s The Killing Joke.

The Killing Joke is perhaps the best known Batman comic in terms of Bruce Wayne’s relationship with The Joker (though Death in the Family is also up there) The Joker has done some pretty terrible things in his storied career as the greatest villain of all time in any medium (I’ll fight anyone who says otherwise), but arguably his worst crime is the physical, psychological, and (certain implications of) sexual attack on the Barbara and Jim Gordon in this story. The comic explores the Joker’s backstory, as he inflicts various tortures on the surviving members of the Gordon family to prove to Batman that even the best of us can be pushed over the edge by one bad day. The Killing Joke has long stood as the best and most disturbing Joker-centric comic, so it’s quite amazing that it took well over twenty-five years before it was adapted for the big screen in 2016.

Films based on Alan Moore’s work have had a sketchy history at best. His comics have been adapted a number of times, despite his loud protestations against said adaptations, and all but the extremely watchable Watchmen have been disasters. From Hell sucked, The League of Extraordinary Gentlemen sucked, V for Vendetta sucked (okay, it didn’t suck, but it is nothing compared to the source material), so my hopes weren’t exactly high when I found out about an animated adaptation of The Killing Joke.

But, like many fans, I was a little excited about the return of Mark Hamill and Kevin Conroy as The Joker and Batman respectively, and the fact that Bruce Timm, one of the creators of Batman: The Animated Series, was guiding the project. I was even excited about the plan to expand Barbara Gordon’s role as Batgirl, a choice that I considered clever as it, if done right, could elevate her above the horrific function of her character in the comic.

Unfortunately, all of those lacking Moore adaptations need to make room for one more as The Killing Joke is mediocre at best and downright insulting at worst. That might seem a little unfair – after all when The Killing Joke movie adapts The Killing Joke comic directly, it is a servicable and sometimes inspired take on this famous story. The real problem is Barbara Gordon herself.

The Barbara Gordon/Batgirl of The Killing Joke is the weakest part of this movie without a doubt. This is entirely the fault of writer Brian Azerello and director Simon Liu, as Barbara deserved so much better than this. The version of the character we get resembles the petulance and immaturity of Batman Forever’s Dick Grayson, with Batman the stern father figure – oh, except she hooks up with him. While she does have skill as a crime fighter, we don’t get to see all that much of it, as she is given a storyline that puts her in the center of the weirdest love triangle I think I’ve ever seen. Barbara is defined by her romantic yet oddly paternal relationship with Batman, a relationship that he doesn’t seem all that up for, even when they are screwing on a rooftop. Yeah, the fatherly subtext is looking a lot more icky after that scene.

Then there is her adversary,  an up -and-coming mobster by the name of Paris Franz (get it? DO YOU GET IT!!!!!!!!) who has a crush on Batgirl. It’s a bizarre storyline and it ends with Barbara hanging up her cape and cowl because she and Batman bumped bat-uglies after being threatened with assault by Franz. What’s even worse is that the first half of the movie barely connects to the second half, which is when the movie finally decides to become The Killing Joke and explores the fascinating Joker backstory and his attempts to twist the straight-laced Jim Gordon into insanity. All of which means I have some questions.

The answer to the last question is obvious – there would be no movie if she didn’t quit, but all the Barbara storyline does to the movie is hurt it. The fact is, The Killing Joke isn’t about Barbara. Unfortunately, she is purely functional to the story of her father, Batman, and the Joker – she’s the inciting incident and the consequence at the same time. It’s not the best way to go about things in a modern context, but this is an adaptation of a comic book from 1989 that has influenced every corner of Batman media since then so we were never getting a truly alternative version. But what’s the point of exploring Barbara in such an infantilising, objectifying way when it adds nothing to the story at large?

So, what about the Killing Joke half of the movie? Frankly, it’s just fine. Mark Hamill is predictably brilliant as the Joker, but the animation doesn’t always live up to Brian Bolland’s gorgeously insane art design. What makes the movie so jarring is that the main themes being explored – the idea of insanity being only one bad day away, the inevitability of murder in Batman and the Joker’s relationship, and the possibility of redemption for even the worst people – has absolutely nothing to do with Barbara’s story, which the film spends so much wasted time attempting to pay lip service to.

The Killing Joke is about the damage, sometimes collateral and always important, that is shared between Batman and The Joker, to the point that it’s heavily implied that Batman murders his arch nemesis at the end of the movie. This is why it is so important to filmmakers and actors like Christopher Nolan and Heath Ledger when they are crafting their own take on this relationship. But this adaptation dilutes the impact of this by focusing on a bad story about a character that deserves better. I think we all deserved better than this. At the end of the day, the joke is on us.

If you enjoyed this retrospective, please be sure to tune in next week for our look at the dreaded Justice League, and check out the rest of the retrospective here. You can also take a look at our other cinematic universe retrospectives, for the Marvel Cinematic Universe and the Jurassic Park movies! And, as ever, if you enjoyed this and want to see more stuff like it, please consider supporting us on Patreon.