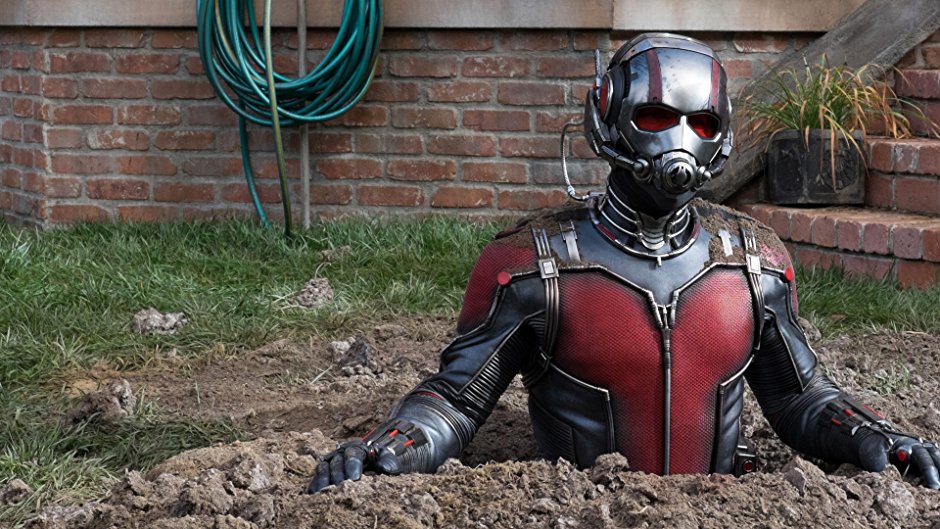 Ant-Man is a strange movie. After the flawed fireworks display that was Age of Ultron, the choice to end Phase Two of the MCU with this deliberately smaller movie seemed like a shrewd one at the time. Two phases in and critics and fans were starting to see the formula of the MCU movies: mostly CGI punch-ups that take forty-five minutes and lots of sky beams, so Ant-Man, due to its unique premise and character, was supposed to find that spice of variety again. The only problem is that Ant-Man is a largely derivative movie, not just in terms of the MCU but of all superhero movies, that apart from the action scenes in miniature, is crushingly dull and predictable.

Ant-Man stars Paul Rudd as thief-with-a-conscience (read: daughter) Scott Lang who is manipulated into stealing the original Ant-Man’s suit. The original Ant-Man is Hank Pym, played by Michael Douglas, purely an exposition machine. Along with Hank’s estranged daughter Hope, Lost’s worst-of Evangeline Lilly, the three form a plan to steal Hank’s research (which he used to create the suit) back from his former protégé, Darren Cross, who has tiny suited plans of his own. Basically, this is the MCU’s version of a heist movie, and in fairness, this part of Ant-Man works quite well.

In terms of action, Ant-Man’s powers allow director Peyton Reed and his effects team to showcase a whole different heroic skill set, as well as filtering the action through the lens of small vs big. Most of the time in which Scott is miniaturized, Ant-Man feels fun and light. It’s the rest of the movie that is the problem.

This is the MCU’s fifth origin story, and it feels painfully by numbers by this poit. The hero is bit of a loser, the knowledgeable former Ant-Man has a rough relationship with his daughter, the daughter has heroic plans of her own, and the villain is a shadow version of the hero: stop me if you’ve heard literally all of this before. All of this culminates into a movie that constantly struggles to find a personality. Unlike Robert Downey Jr, Paul Rudd’s charisma can’t do the heavy lifting for Scott’s character, while most of the comedic moments feel like a badly improvised Apatow movie. The Pym family are certainly the most interesting characters: Hank has a wealth of backstory as the original Ant-Man that the movie leaves, sadly, mostly to the imagination.

Hope Pym has been screwed, not by Scott Lang as you might imagine, but by this movie. Not only does she have no chemistry with Scott, but she’s obviously the better candidate for super-heroics and no substantial reason is given for her not pursuing it in this movie with more vigour. Evangeline Lilly has nothing but briskness and a general lack of patience to work with, and Hank’s reasons for keeping the truth about her mother a secret is some primo bullshit that’s only there to deliver a second-act emotional punch that’s really a swing and a miss.

Darren Cross, aka Yellowjacket, is the MCU’s latest from the assembly line of crap villains. Cross, played by Corey Stoll who at least looks like he’s having fun, is supposed to be the mirror of Hank, as a genius scientist, and Scott, as Hank’s former protégé. But he is in so little of the movie, and shares so little time with Scott, that those parallels never find their way to anything near convincing. Also, here are two hot tip for any aspiring superhero screenwriters out there: One: don’t introduce the reason for your villain’s insanity so near the end, and two: if there’s a vaporizing gun in play, that’s obviously the coolest bit of tech anyone in your film has so actually use it, maybe?

Ant-Man ends Phase two of the MCU as Iron Man 3 began it: by wasting a potentially great premise by playing things too safe.

If you enjoyed this article and want to see more stuff like it, please check out the rest of our MCU retrospective, and consider supporting us on Patreon!