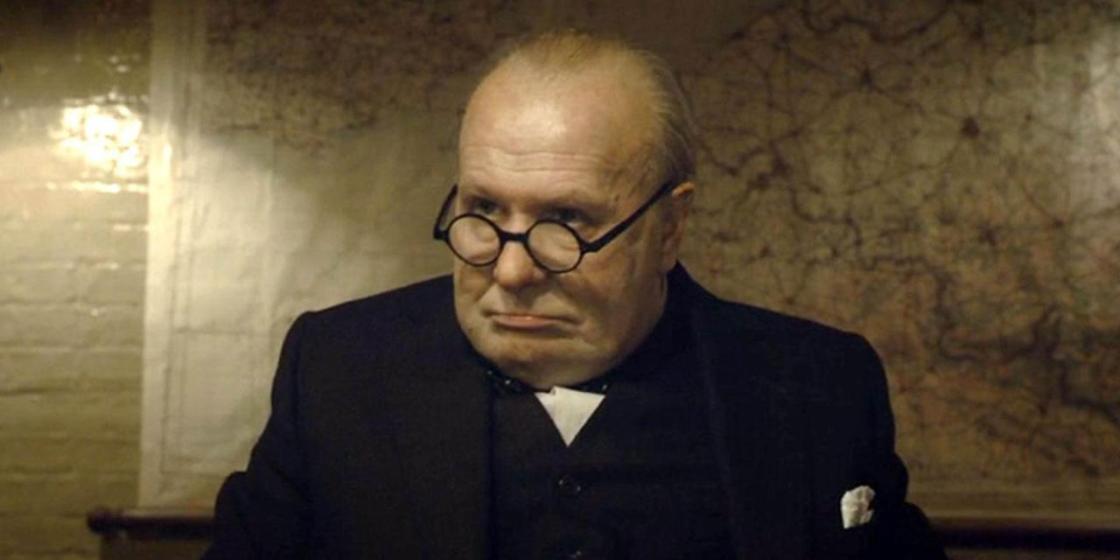 If there’s one thing the world of pop culture didn’t need, it was another fucking Churchill biopic.

In the last two years, we’ve had three seperate depictions of the iconic British PM (played by Brian Cox in Churchill, Jon Lithgow in The Crown, and Gary Oldman in Darkest Hour), and frankly, I’m just bored of it. There’s a reason this is our last Oscar Season review to go up, and that’s because neither of us could pluck up even the remotest interest in actually seeing it; as a pair of British people, flag-waving over Churchill is about as staid and overdone as every single Yorkshire pudding you’ve ever eaten.

So I’m not going to come into this review pretending that I am in any way neutral towards this movie, because I’m not. If I wasn’t writing about it here, there’s no way I would have bothered with it. But here we are, so let’s give it a fair (ish) shot.

To start with: yes, in all fairness, the cast here is exceptional, and Gary Oldman puts in a performance worthy of all the praise it has garnered him. Kristin Scott Thomas is as reliably brilliant as ever, and the rest of the supporting cast (including Ben Mendehlson not playing a villain for a change) put in solid turns as they take up the mantles of various British political figures and other contemporaries of Churchill. Director Joe Wright (of Atonement and Anna Karenina fame) is more than comfortable in the time period and the political backdrop, and it’s a confident if not particularly ground-breaking piece of work from him.

All this to say that the pieces are all here with this movie on a granular level, but as a complete beast Darkest Hour just does nothing for me. It’s not the movie’s fault that I was bored by the time I finished reading the premise, but the movie does little to really delve deeply into Churchill as a character compared to other depictions of him, because there’s simply so little fallow ground left to harvest from: I understand why Churchill is a compelling figure to so many, but it feels like every period drama worth it’s salt has had a crack at him at one time or another (Doctor Who even featured him just a few years ago), and there’s very little new to say with a movie like this one. I have a degree in history and am still in touch with several people I studied with at university, the kind of people you would imagine should be the target audience for a movie like this one, and every one of them greeted hearing about it with something between a shrug and an eye-roll at how obvious it was as a piece of Oscarbait. It’s not that this is a bad film in and of itself, it’s that the core was rotten before things even got started.

With the innovative, edgy, disturbing war movie Dunkirk another one of the Best Picture nominees this year, along with a collection of works from new filmmakers making statements and old ones trying something new, it’s hard not to compare, and Darkest hour – dull, slow, obvious, and uninspired by comparison – doesn’t exactly come out on top.