I can try and get all cute with you in the intro here, but that’s the only word you need to read about this movie: it’s fucking garbage and you’d be better off skipping it altogether (not least because leading man Ben Affleck has a habit of groping women). But, since I had to go see it today and am frankly still angry about that six hours later, I suppose we should get into it.

I think the first mistake Justice League makes is centreing it’s story around Batman; yes, he’s perhaps the most iconic and reliable character of the franchise, but he’s also the one we’ve seen a half-dozen times before in the last twenty years, and the nebulous arc they come up for for Batfleck – he’s sad because he killed Superman, so he’s…a prick? – is so thin and poorly-defined that almost anyone else in the driver’s seat might have helped. But you’ve got Wonder Woman right there, fresh off the success of her rambunctious solo movie, with a direct personal connection to the villain that might have actually given the main plot a little more weight: the plot beats she’s given, about hiding from leadership roles after the events of her solo movie, would have made so much more sense as a central arc and landed with a lot more oomph given her deeper characterization and far more watchable performance. Gal Gadot is again on-form here and steals the movie right out from Ben Affleck’s nose, even if the movie spends an inordinate and galling amount of time framing shots with her arse in the foreground.

But it’s not like the caped crusader is the only problem in Justice League. The much-hyped Jason Momoa as Aquaman/Arthur Curry is also a massive bum note – in their attempts to cool-ify one of the universe’s most inherently dorky heroes, the movie just makes him a dick with his shirt off. Yeah, Momoa has some charisma, but he never gets much in the way of actual depth and winds up a frat boy with a trident – oh, sorry, a quadrant

. I was interested in Ezra Miller, who I really dig, as the Flash/Barry Allen, but the script is so aggressively awful with him that even his performance can’t save it. He’s subject to some of the more obvious plot holes this movie has to offer (explain why a kid like Barry Allen who has to work three jobs to survive has a suit made of spaceship skin and lives in an apartment with a half-dozen TVs and other expensive gadgets? Or how he can be “completely off the map”, as Batman and Alfred describe him, and then a scene later be signing in to a prison to visit his father with his real name and identification?), as well as it’s more gruelling attempts at humour. Indeed, perhaps Justice League’s most grandiosly awful moment comes when Cyborg/Victor Stone turns Barry down for a fist-bump; Barry glances away and mutters “racial tension” because, you know, black people! 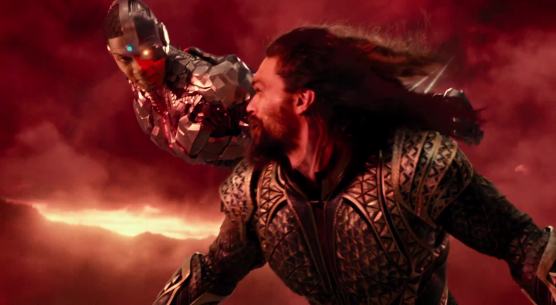 It’s a shame too, because there was a crumb of something interesting there with Victor Stone. In his introductory scene, we see him coming to terms with his new powers and the implications of what they mean for him and his humanity, and Ray Fisher, all credit to him, actually manages to imbue those few minutes with genuine pathos. I could almost pretend I was watching a real movie. But the film fails to deliver on what this could have opened up, making time instead for Superman to grope at Amy Adams with his CGI-d upper lip (what has film-making become, seriously), and Ray Fisher is grimly underserved for the rest of the two-hour run. 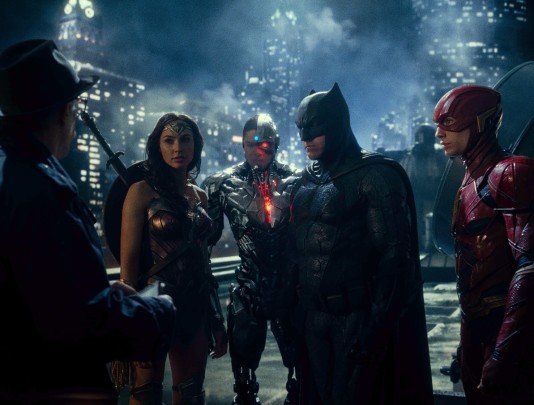 Oh, yeah, Superman’s back too! Not that you didn’t already know that, because it wasn’t as though DC in any way tried to keep the reveal under wraps. I’m not saying I would have been surprised when he was brought back from the dead (of course, bringing him back means his shirt, jacket, and tie all burn off, but his pants and trousers stay on, because, you know, Henry Cavill didn’t work that hard on his body for nothin’), but it would have been nice if DC had at least made the pretense of not ruining that twist with the first cast photos from the film eighteen months back. It’s just yet another thing they don’t give a shit about, content to slap Batman on their movie and call it a day instead of attempting to hash out some hype and interest around their story and characters. 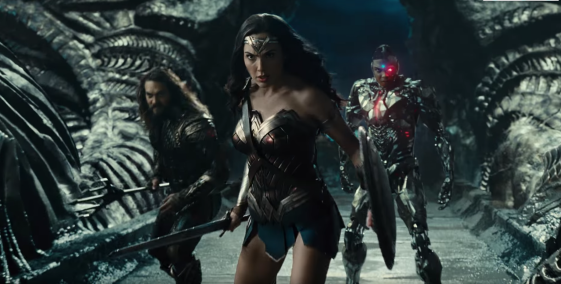 At it’s core, Justice League is a film that lays bare just how much bullshit we as audiences have been conditioned to put up with from the DC universe (and, indeed, superhero movies in general, though they have seen some improvements this year with releases like Logan and Spiderman: Homecoming). There are gaping continuity errors, with cutaways revealing dozens of people who weren’t there a single shot ago and magical powers that only come in useful when some pathos isn’t on the line. There are stunted, stilted fight scenes that leave no impression, blurring into one ugly grey CGI clusterfuck as soon as the credits roll. The acting is often genuinely awful, with Ben Affleck putting in an almost unfathomably bad performance that looks even worse given all the iterations of Batman we’ve seen over the years. The pacing is all wrong, lurching into the third act before it seems done with the introductions; the villain is fuck all and his army of monsters uninteresting; the jokes are lengthy and clunky and, as noted above, oddly racially charged; the pathos is ill-earned and often cringy.

Minute to minute, scene to scene, it’s not even enjoyable to watch. This is a movie which is, at it’s core, badly made. There’s no love, no passion, no care here, because all we apparently require from a DC movie these days is the ability to cut a decent two-minute trailer from somewhere in the two-hour runtime. It’s frustratingly terrible in ways that could have been so easily fixed, if anyone had cared to look close enough to do so. As it is, it feels as though someone walked away from the final cut, dusting off their hands, without bothering to watch back the mess they’d soldered together.

And why should they? They got away with Man of Steel, they got away with Batman vs Superman, they got away with Suicide Squad – people called Wonder Woman a masterpiece, and it’s far from that despite it’s relative merit over the movies it shares a canon with. But it seems like, when it comes to the DC franchise, fans and critics are content to handwave away the obvious meritlessness of movies that Justice League so perfectly epitomizes when there’s a post-credits scene to dissect or a Darkseid reference to coo over. You can call me cynical all you want, but I’ll never be as cynical as this joyless, artless, formless turd of a franchise.