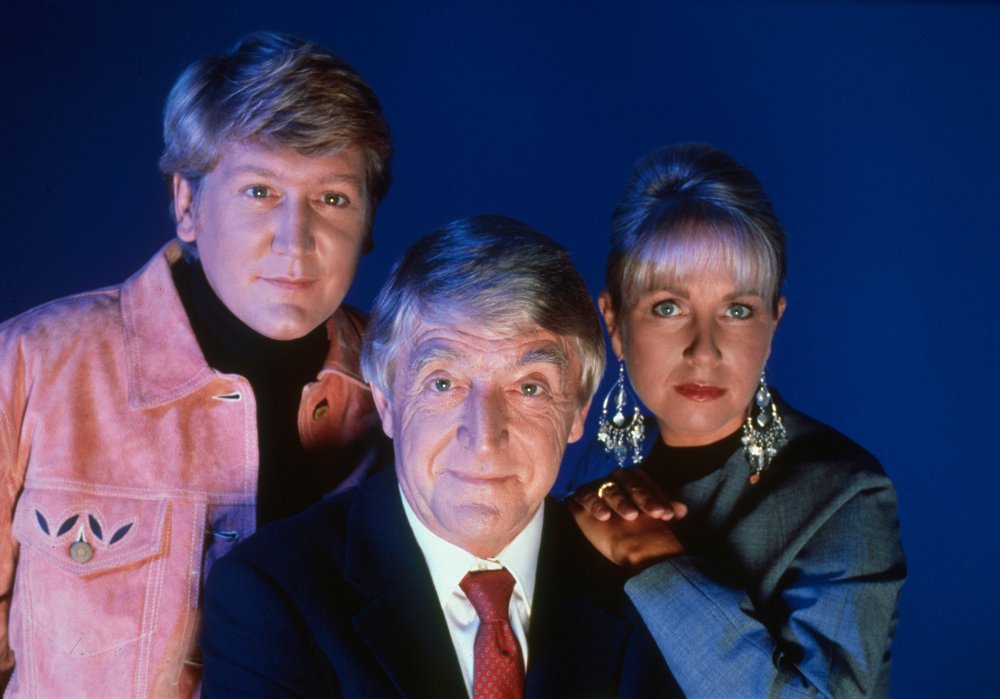 What do you think of when you think of found footage horror? Cannibal Holocaust? Paranormal Activity? The Blair Witch Project is often quoted as the first “true” found footage movie, and I think that’s a pretty fair assumption: it’s a truly spectacular version of the genre, and one that turned it into an unlikely breakout subgenre. If you were asked to name a movie that defined found footage, you’d be crazy to say anything other than The Blair Witch Project. But there’s a movie that long-preceded that one, a movie that I love with every fibre of my being – and a movie that you need to see if you consider yourself a fan of the genre.

Ghostwatch was produced under the banner of Screen One, a series of movies created for the BBC, and broadcast on Halloween night in 1992. The film stars Michael Parkinson, Craig Charles, and Sarah Greene, real-life stalwarts of recognisably truthful British television. It follows an apparently “live” investigation into poltergeist activity plaguing an average British suburban family, which soon turns dark as the evil spirit uses the live broadcast to fulfil a horrible destiny.

Now, the found footage trick is one that only really, really works before you understand what the genre is, which is near-impossible in a post-Paranormal Activity era. Take something like the aforementioned Blair Witch Project; their use of viral marketing and faux-documentary format were enough to convince many viewers that the events they were being shown were actually real, and had the fallow ground to do so because nobody really knew what they were dealing with.

At the time when Ghostwatch came out, seven years prior to Blair Witch, it had the similar and even more magnified enormous benefit of reaching audiences who hadn’t been exposed to the tropes and rules of found footage storytelling. Filtering the story through a supposed live broadcast investigation featuring famous, instantly trustworthy faces from British factual television – Sarah Greene was a presenter of popular children’s television program Blue Peter, while Michael Parkinson hosted a nationally-iconic talk show – couched the story in an uncomfortable realism.

And people brought it. They really did. And why wouldn’t they? The show recieved dozens of complaints, more than 30,000 calls in total, and was even subject to a study a few years later on whether it was the first show to cause PTSD in children. The use of famous faces, especially from children’s television, along with the straight-faced documentary format served a deeply discomforting mix that brought horror far too close to reality for many.

The sheer boldness of the endeavour is enough to secure Ghostwatch a place in horror history, but it’s the quality of the piece and commitment of the cast that really elevates it to true classic status. Director Lesley Manning wove brilliant performances and taut writing; he uses background glimpses of the mysterious ghost much the same way Mike Flanagan did last year in his highly-vaunted The Haunting of Hill House, and to similar chilling effect. I don’t want to give too much away, because it’s really a joy to watch this story unfold without knowing what’s coming, but the meta-scares Ghostwatch uses to break through the fourth wall look forward-thinking even today. And hey, there’s a twisted delight watching Michael Parkinson committing to straight Twilight-Zone-esque horror for an hour and a half, if nothing else.

The sheer novelty of seeing people who, even now, feature more in fact than in fiction dealing with the slow-building terror of a true haunting is excellent enough, and it invokes the way modern ARGs blur lines between fiction and reality (but that’s a whole other article I already wrote). It’s a masterfully-made example of a genre that really didn’t even exist yet and, even now, Ghostwatch stands as an uncomfortably realistic take on found footage – and one that deserves to rise into its true place in horror movie history.