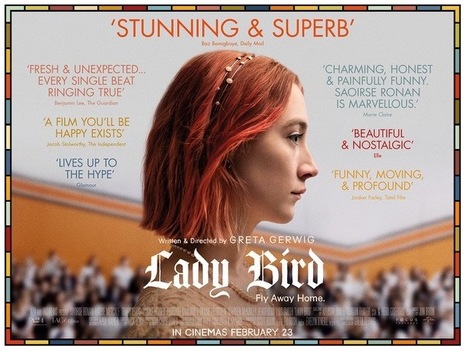 A coming-of-age tale set in Sacramento and following seventeen-year-old Christine (a Saoirse Roman who actually seems to have found a role worthy of her prodigious talent), who has dubbed herself “Lady Bird”, as she bucks against the expectations of her family, her community, and herself, Lady Bird is a weird film for me. Now, look, I know that as a critic I’m not meant to drag my own shit into these reviews, but I’m a twenty-something from a tiny town who spent most of my late teens a snarling, insecure mess desperate to leave the self that I’d become in that place behind. It’s funny – with a film like Lady Bird, it’s hard to approach from a critical perspective. I had no trouble reviewing the others movies I’ve covered for this Oscar season from a reasonably unemotional place, but that’s because none of them felt as personal as this one does. But let’s get into it, and try to take a look at why Greta Gerwig’s debut feature is firmly deserving of the hype.

For a start, this is simply one of the sharpest comedies I’ve seen in a long time: capturing that curtain-twitching malaise that comes with the restlessness of living in a small community and finding characters within that who feel real and well-developed, it doesn’t shy away from exploring the oddness of growing up in a place that seems to have laid your identity out for you based on which side of the literal train tracks you live on. The relationship between Christine and her best friend (played by a much-unsung Beanie Feldstein) finds the nooks and crannies of those girl-girl relationships and shines a light in their dark corners without undercutting the intensity of the love that fuels them, while her romantic life makes for some excellent performances from the supporting cast – Lucas Hedges is heartbreaking, but it’s Timothée Chalament (of Call Me By Your Name fame) who makes the biggest impression as Christine’s first lover and an infuriatingly accurate portrayal of every teenage boy with a guitar anyone ever dated.

There’s a reason, too, that Laurie Metcalf has been getting so much hype for her performance as Christine’s mother Marion. She’s as big a part of the film as her daughter, her arc of sticking with Sacramento running concurrently to Christine’s of leaving it. Their relationship is one of the best things this film has to offer, once again finding that space that allows the story to explore the sweetness between them but also those endlessly spiky edges, too. For all that the film features romance subplots, the real love story is between Christine and Marion, tied up in a curious but satisfying third act and epilogue that’s enough to make my heart ache with what it stirs up in me.

It’s not that Lady Bird utterly captures every tiny thing that happened to me when I was that age, but that it finds the characters, the emotions, the ruthless, selfish, and all-consuming intensity of all of it, and finds a way to commit that to screen. I love a lot of the Best Pictures nominees this year, but none of them have moved me in the way Lady Bird did, and for that, I have to pick it as my favourite.